Gold of the Americas

Available Platform: DOS - Alias: The Conquest of the New World

Gold of the Americas: The Conquest of the New World is a historical strategy/simulation game created by SSG in 1989 for MS-DOS, Atari ST, and Amiga. 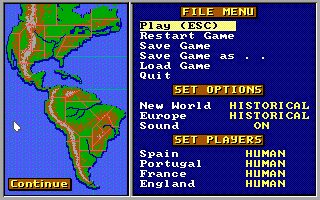 Gold of the Americas: The Conquest of the New World is a historical strategy/simulation game created by SSG in 1989 for MS-DOS, Atari ST, and Amiga.

Ian Trout, founder of Strategic Studies Group, and author of "Reach for the Stars" and "Decisive Battles of World War II", designed the game together with Stephen Hart.

The game allows up to 4 players, in a hot-seat mode, to control the powers that colonized America in the 16th century: Spain, England, France, and Portugal. If you don't have 3 friends with you, the computer will take care of the other factions. Beware because the AI is quite smart! You have 30 10-years turns to win the game by earning the highest number of colony points.

You can choose between historical or random settings. If you prefer historically, Portugal and Spain will have some benefits at the beginning of the game, while England and France will have advantages in the latest turns.

I'm sure that you are already thinking that this game must be similar to Sid Meier's Colonization. The premises are indeed the same, but there are some crucial differences. First of all, the goal won't be reaching independence. In this game, you represent the European powers, so a colony that is not so loyal won't be a good thing, it will be a problem. Even though being the Viceroy of the New World colonies, you will be suffering from the greedy demands of the King (but this is part of the difficulty of the game).

Another difference is that exploration plays a much more significant role. In the beginning, you will have to send expeditions to discover new territories, and only after that, you can colonize them. If you are lucky, the new lands will have gems and gold, and suitable climates. Of course, they will also have some natives that you will have to manage somehow.

Distribution of the resources will be fundamental: you will have to assign armies to protect the colonies, decide how much money goes to the company development, or to the promotion of the loyalty to the King. You will have to defend your trade ships with warships, and maybe send your conquistadores to raid, or invade, enemy colonies.

In general, the game has a right level of realism, probably more than any other game with the same settings. The fact that it's limited to 30 turns improves the playability.

Graphics is decent, it's probably the best you could have on a PC with an EGA card, but they could have done better on the Amiga. On the other side, the mouse-driven user interface is surprisingly good. This is a game that you could play without reading the manual.

If you are a fan of historical 4X games, this is something you have to try.