Gunfright is an action-adventure/shooter created by Ultimate Play the Game initially for the ZX Spectrum in 1985. 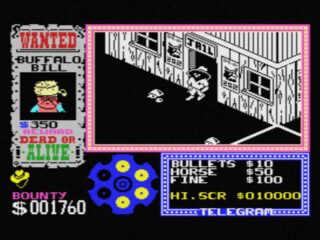 Gunfright is an action-adventure/shooter created by Ultimate Play the Game initially for the ZX Spectrum in 1985. It was also ported to MSX and Amstrad CPC.

The game developed by the Stampers brothers is built with the "Filmation" engine. Filmation was written for the legendary Knight Lore, which made the isometric perspective popular in computer games. In this case, we are talking about the second release of this engine, so it has several enhancements compared to the first release. Gunfright and Nightshade are the only games ever built with the Filmation2.

But unlike Knight Lore and Nightshade, Gunfright doesn't have a fantasy setting. In this game, you are a sheriff in the old wild west, and you have to eliminate all the criminals and collect the bounties. There are fewer puzzle elements and more action in this game, which is more a shooter than an adventure; that's why many reviewers considered it an easier and funnier experience than the predecessors.

It might look like a straightforward game today. Still, Gunfright represents the most advanced title created by Ultimate Play the Game, with the iconic isometric view that made history and was highly influential. See, for example, Head Over Heels or Cadaver by the Bitmap Brothers.