Indianapolis 500: The Simulation is a racing sim created by Papyrus Design and published by Electronic Arts at the end of 1989 for PC and Amiga. 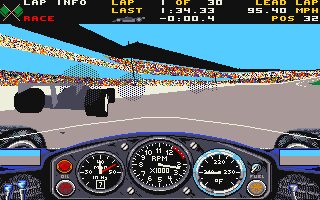 Indianapolis 500: The Simulation is a racing sim created by Papyrus Design and published by Electronic Arts at the end of 1989 for PC and Amiga.

The game was designed and programmed by David Kaemmer. At the time of its release, it represented the state-of-the-art in terms of the 3D racing simulations. It adopts 3D polygon graphics (simple polygons, so no texture-map) and features realistic behavior of the vehicles, especially for the crashes, and replays with different camera angles. It has only one circuit (the famous Indianapolis one), but this didn't prevent the game from becoming extremely popular. Amiga users had to buy an accelerator to have decent FPS, but also on an Amiga 500, the game was playable. For the first time, many users had the chance to drive their cars in 3D, change the settings of the vehicles, and see it responding realistically. It was also amusing to generate massive crashes and watch the replays.

Indianapolis was surpassed only by Geoff Crammond's Formula One Grand Prix, aka World Circuit, a real masterpiece for realism and accuracy of the simulation. But Indianapolis 500 is still in the heart of many players, and if you never tried it, you should really do it.