Project Nomad is a space exploration game developed by Intense! Interactive and published by GameTek in 1993. 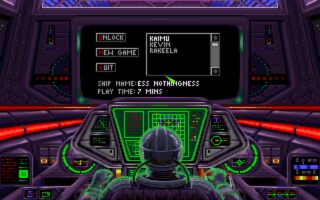 Project Nomad is a space exploration game developed by Intense! Interactive and published by GameTek in 1993.

I'm going to be straightforward about this, I don't know what to think about Nomad. On the one hand, I see the game in theory, a mix of genres tied together with a complex and interesting story that honors other adventures of the same genre, with deep characters and innovative designs. Something like Oblivion in its time. On the other hand, I also see a title that aged badly. The mechanics of the game are very demanding and unfriendly, the combination of genres is simply confusing and there is a recycling of characters that seem to be made to become memes. But this is a title with many personalities that we will revisit for better or worst.

The game was created in 1993 by Papyrus Design Group, a company known for developing racing games, such as the NASCAR Racing saga. The adventure that was published by GameTek came out exclusively for MS-DOS.

Regarding the plot, the game starts with communication from OESI, the Organization of Earth's Special Intelligences, which informs one of its members about its mission, the human astronaut that turns out to be the main character of the title. Soon after, the objective of the adventure is revealed: the hero must defeat The Korok, a ferocious race of robots that seeks to destroy all forms of life in the universe to ensure their survival. Similarly, several stories will be revealed through various side quests, which will develop several characters and the origin story of the different 11 races that inhabit the universe.

Gameplay-wise, Nomad concentrates on three main areas: combat, exploration, and economy. It could be said that exploration is the most important factor. Many planets to explore to obtain information based on dialogue are always attentive to a possible fight or negotiation with the different species. The game presents some obvious problems. Among them is that the fights are unfair and depend only on the player's reflexes. The gameplay is suspiciously similar to Starflight, not to say that it is almost a plagiarism and although the history and dialogues are good, the atmosphere never catches the user. With this out of the way, it is worth noting that the developers added a huge amount of dialogue lines and did a phenomenal job of making each character feel unique. Each species feels human, with their own features adapted to their traits as a species; it is a really well-done job and motivates them to move forward despite the great difficulty that the game presents.

There is not much to say about the audiovisual part. The developers didn't risk much with the sound, omitting to use music and making acceptable sound effects. I have a little contradiction with the graphics; there are parts of the adventure where the terrains are very detailed, and the composition is very well thought out. Also, remember how I said that each character's dialogue makes them feel unique? Well, it's not the same here. Almost all the designs are recycled, which makes sense because there is a great variety of species, but it would have helped to avoid designs that, in my opinion, are ridiculous and memeable.

Although it may be a bit ambitious, Nomad is a good game. I don't know how recommendable it is for those who are not used to this type of videogames; its difficulty is directed more to them than to experienced gamers. But in the end, those who enter this world will see the developers' passion in the construction of a vast universe, along with each inhabitant that composes it.