Outpost is a space colonization strategy game created by Sierra and released in 1994 for Windows 3x and Macintosh. 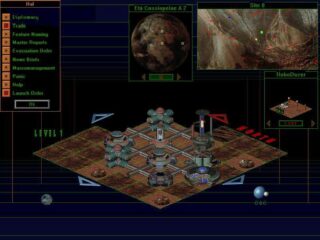 Outpost is a space colonization strategy game created by Sierra and released in 1994 for Windows 3x and Macintosh.

As in many other science fiction classics, Earth will be destroyed by an asteroid, and humanity decides to launch a space colonization mission. You are, of course, the leader of this mission.

The difference between Outpost and other titles is that Sierra decided to hire a real scientist, a NASA employee called Bruce J. Balfour, to design the game as realistic as possible. Unfortunately, realism not always translates into great gameplay. For sure, it's not an easy game, but if you are the kind of gamer that likes to read a manual, this is really a fascinating and engaging title.

Initially, you have to send probes to different star systems to identify the one you want to colonize. Once you have chosen the planet, you can start building your base in a way similar to Sim City or Civilization (or better, Alpha Centauri). You have plenty of structures to choose from, divided into surface and underground facilities, which shows the game's complexity. You will also need to mine the planet to extract materials. Having an always growing population will be the main goal, even if you can also count on robots to perform many tasks.

Once your colony is strong enough, you can start thinking about launching other missions or even terraforming a planet.

Outpost was really a very advanced game for the year it was created. Unfortunately, Sierra decided to release it a bit too early; the game was full of bugs, and some features mentioned in the manual were not even developed yet. That's why it's remembered as one of the "buggiest" releases ever in the history of videogames. Despite this, it was a good commercial success.

Now it's time also for GamesNostalgia users to finally play this game. Just one suggestion, don't forget the manual!

B Schneider you are totally right, but we cannot publish good games only. History must be preserved! But I agree the 80% was a mistake :)

No, please, no. Outpost was a totally bugged game that did not include features that were mentioned on the packaging. It was a total desaster. I was a magazine editor at the time of the release and Sierra even mentioned after some weeks that some features that actually were shown in Screenshots vor Outpost would now end up in Outpost 2. They patched the game to a point where it was "completable" but not fun.
This is one of the worst game releases ever, abandoned by the publisher and rather trying again with s sequel, and it does not deserve 80%. Would it have released at a time when the Internet was more widespread, the "shitstorm" would have been unimaginable.