Shadow Warrior is an action shooter game developed by 3D Realms Entertainment and published by GT Interactive Software in 1997 for DOS and Mac. 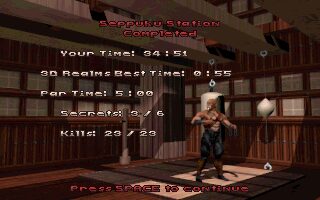 Shadow Warrior is an action shooter game developed by 3D Realms Entertainment and published by GT Interactive Software in 1997 for DOS and Mac.

In 2013 it made its way to Windows and was also formatted for iPhone and iPad. The game has seen 4 sequels and remakes since its initial release. Shadow Warrior introduced many game conventions including ladder climbing, freely driving, room-over-room, and multiple fire modes for guns, to name a few. It was made using the Duke Nukem 3D engine and has a first person view.

The game takes place in a kind of pseudo-Japan and incorporates some off-color humor. Lo Wang (insert childish giggle) is a gun for hire working for a large corporation, but soon finds out that they are engaging in evil activities. After handing in his resignation he now has a target on his back. Lo can use a multitude of weapons to dispatch his enemies including a Katana, sticky bombs, Uzis, rocket launchers and more. Lo also has command of whatever vehicles he finds along the way. Shadow Warrior has more of a puzzle-solving element than the average first person shooter, but still keeps exploration and combat central to gameplay.

Often called referred to as the Japanese Duke Nukem, the game had some seriously mixed reviews. The humor and action make the game quite entertaining, so forget what you heard and give Shadow Warrior a chance.