Space Hulk is a squad-management tactical videogame, released in 1993 for MS-DOS and Amiga, based on the popular board game by Games Workshop with the same title. 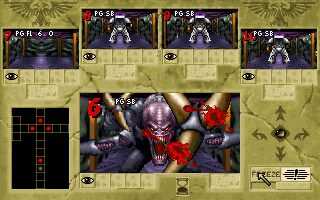 Space Hulk is a squad-management tactical videogame, released in 1993 for MS-DOS and Amiga, based on the popular board game by Games Workshop with the same title.

In this horror/sci-fi title, with some elements of RPGs and dungeon crawling, you control a team of genetically enhanced Space Marines whose goal is to destroy an evil alien race called the Genestealers.

Gremlin Graphics developed the two previous adaptations of Games Workshop's games: HeroQuest and Space Crusade. But in the case of Space Hulk, the development was granted to Electronic Arts. The American studio didn't try to port all the rules, but rather create a game with the same atmosphere, but maybe different gameplay - something that could use the new hardware capabilities of the computers of the '90s. In fact, Space Hulk is a real-time game, not a turn-based one, as you might have expected from a board game adaptation.

The gameplay is made of two different modes: the first-person view, where you control your Space Marine, and the squad view, where you can issue orders to the team, from a top-down perspective. The "freeze" button is a brilliant solution that allows you to pause the action for a limited time, to give orders to the other members of your squad. But you can only freeze time for a short period, and the button needs to recharge before you can use it again, which makes the game much more frantic.

Great graphics, sound effects, and music (including the piece "Get Out Of My Way" recorded by D-Rok, featuring Brian May) contribute to make this game a masterpiece. The DOS CD version, in addition to the 256 colors VGA graphics, offers the full digital speech.