The Bizarre Adventures of Woodruff and the Schnibble

The Bizarre Adventures of Woodruff and the Schnibble is an adventure game created by Pierre Gilhodes (Gobliiins series) of Coktel Vision and published by Sierra On-Line for Windo... 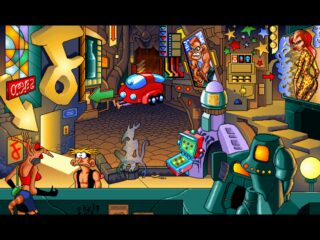 The Bizarre Adventures of Woodruff and the Schnibble is an adventure game created by Pierre Gilhodes (Gobliiins series) of Coktel Vision and published by Sierra On-Line for Windows in 1995.

Woodruff shares his graphics and particular type of humor with the Gobliiins series. It also utilizes the smart cursor point-and-click interface that appeared in King's Quest VII: The Princeless Bride, which highlights usable items.

Set in a dystopian future where a totalitarian government reigns and oppression is rampant, one scientist is looking for a way to heal the world. Through his research he discovers the Schnibble, which is said to be able to bring peace. Once the government catches wind of his discovery, thugs are dispatched to capture him. Our hero Woodruff, son of the scientist, must use his father’s invention to age himself in order to save his father and find the Schnibble. With his newfound adulthood, Woodruff can roam around his world freely and do his thing.

This game features strange characters, hilarious animations, and nice wisecracks from Woodruff himself. This obscure gem is hilarious from start to finish, but is still a serious adventure title with incredibly difficult puzzles. Gobliiins fans will feel right in their element, but any adventure fanatic who likes a challenge will find themselves charmed by Woodruff as well.

Download The Bizarre Adventures of Woodruff and the Schnibble - Windows 3.x Version