1830: Railroads & Robber Barons is a conversion of a very popular game with the same name created by Avalon Hill. 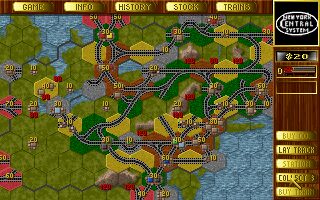 1830: Railroads & Robber Barons is a conversion of a very popular game with the same name created by Avalon Hill. The game was developed by SimTex and released in 1995 for MS-DOS.

What makes this game unique is that it allows you to understand railroad economics and achieve success. You either win by earning a specific amount of money, or the AI goes bankrupt. Of course, you can easily lose if you don’t spend your money wisely and end up dealing with bankruptcy.

The game is created by a (now defunct) developer named Simtex. The company, created by Steve Barcia in 1988, was focused on creating a turn-based strategy game. Some of their best titles are Master of Orion and Master of Magic. 1830: Railroads & Robber Barons was a different game for them because it was focused more on the macroeconomic space rather than being a railroad tycoon title.

What makes the game unique?

As soon as you start playing 1830: Railroads & Robber Barons, you realize this is not a railroad simulator. Instead, it focuses on the railroad industry, economics, growth, and making the right decisions. This is more of a business simulator. You end up buying stocks from other businesses, investing in your own railroad, and signing contracts to pursue growth and value in your field further. While the game itself is based on a board game, it has its fair share of differences, such as playing against a computer and planning many steps ahead of the competitors.

1830: Railroads & Robber Barons stayed rather faithful to the Simtex formula established by Master of Orion. You will see a similar interface and even a few similarities, like being able to play at the macro level and controlling the game world. However, 1830: Railroads & Robber Barons is mostly a board game to videogame conversion and a very successful one. There’s a lot more focus on visuals, and you have lots of screens involving economics, shares, and mathematics.

That’s where the game shines, the fact that it seamlessly combined a board-game-like map, yet you also get to provide initial offerings, buy shares, and manage your income. The game also brought in a History tab where you can study all your actions and see what you did wrong. It’s a game that focuses a lot on teaching players about macroeconomics, and it still holds up to this date.

The game does an excellent job at remaining relevant even in today’s day and age. The fact that it’s a conversion from a board game does help quite a bit. You still get to establish your own rules and try out a variety of different strategies. It’s definitely one of those games that can take a bit of time to get used to since you’re doing more than just laying tracks and managing trains. You get to handle a massive railroad empire, and that can be taxing.

However, 1830: Railroads & Robber Barons stands out with its complexity and the fact that it allows you to play your favorite board game in the form of a videogame. While there’s less focus on train management, this is still a great title, especially if you are a fan of economics, tinkering with strategies, and ready to learn something new. 1830: Railroads & Robber Barons is still an outstanding turn-based strategy game, so even if it might seem a bit hard to get into, it’s a good idea to try it, since it delivers great complexity and lots of replay value!