Command and Conquer: Tiberian Sun is a real-time strategy game developed by Westwood Studios, published by Electronic Arts and released for Windows in 1999. 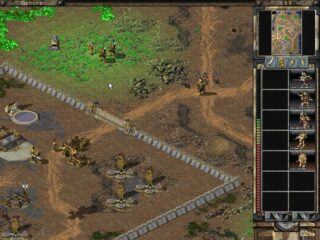 Command and Conquer: Tiberian Sun is a real-time strategy game developed by Westwood Studios, published by Electronic Arts and released for Windows in 1999. The expansion Firestorm was released the following year and was declared freeware in 2010.

This third game of the Command and Conquer series continues the plot from the original. This direct sequel saw many enhancements including the use of a new graphics engine and overhauling the AI. Tiberian Sun also features full motion video segments using real actors.

After winning the first Tiberium War, the Global Defense Initiative (GDI) had come to believe that the leader of the Brotherhood of Nod, Kane, is dead. They were mistaken as Kane was merely in hiding. Now he has returned with better technology and wants to turn Earth into a Tiberium world. GDI must stop Nod by using the very Tiberium technology they wish to eradicate. The game features new units and the ability to spring surprise attacks on your enemies. The game has two playable campaigns for the GDI and Nod factions. There is also a third faction caught in the midst of this war, the Tiberium Mutants. This third party is able to choose whichever side they wish to support. The game features variable terrain for 3D depth and dynamic lighting capable of changes in time of day and simulations of different effects. This was the last entry into the series that offered the ‘split route’ option. This option allows you to choose what route to take and can lead to new discoveries. With nice graphics, a decent soundtrack, and fun explosions, this is a good follow-up to the original.

The Firestorm expansion pack included new gameplay and missions. It involves the GDI working to stop the fractured Nod from spreading Tiberium. It also had the purpose of adding certain gameplay elements that had to be omitted due to a push for the release of Tiberian Sun. Tiberian Sun, though released to some mixed reviews due to the amount of hype surrounding its release, it was overall well-received. Selling more than 1.5 million copies in the first month after its release and winning multiple awards.