Hexen II Mission Pack: Portal of Praevus is an expansion pack of Hexen II developed by Raven Software and published by Activision in 1998 for Windows. 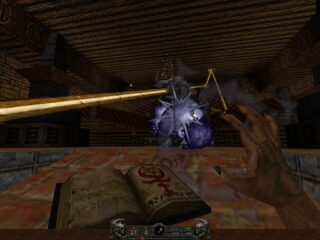 Hexen II Mission Pack: Portal of Praevus is an expansion pack of Hexen II developed by Raven Software and published by Activision in 1998 for Windows.

Raven Software, the American company from Wisconsin, is responsible for developing great games such as Black Crypt, the Call of Duty saga, and even the Heretic saga, among others. This last one is composed of four titles, where you can find Heretic, Hexen: Beyond Heretic, Hexen II, and Heretic II.

This expansion of Hexen 2 takes up the story of the original game. After the defeat of Eidolon, the last and most potent of the three Serpent Rider brothers who had enslaved the Thyrion world, a new threat appears. An evil wizard named Praevus was aware of the fall of the tyrants, and with this event, he tried to revive them to take their power and enslave them. Thus, the heroes who put an end to the threat of the serpent riders must take down this diabolical being.

This game takes place in two locations, one of them is the already known Blackmarsh, where the characters must re-visit the area with new enemies waiting for him. Besides, this expansion features a new continent called Tulku, with a Chinese-Tibetan theme. Also, a new character named demoness is introduced, who fears the resurrection of her old master Eidolon and being enslaved again. She comes with new weapons and skills focused on survival, such as landing softly from a fall or turning damage against her into extra mana. Thus, the demoness joins the other four existing characters, the Necromancer, the Assassin, the Crusader, and the Paladin.

This expansion was well received by the general public, taking advantage of other small changes in the interface, graphics, and even the script. If you are a fan of the saga and thought it was over, this is your chance to relive that part of you or download both games and live the full experience.

This is an expansion, so the original game is required to play.