Hexen II is a dark-fantasy first-person shooter developed by Raven Software and published by id Software in 1997 for Windows and 2002 for Mac. 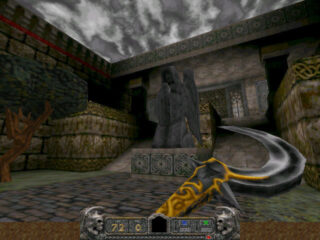 Hexen II is a dark-fantasy first-person shooter developed by Raven Software and published by id Software in 1997 for Windows and 2002 for Mac.

The development company founded in Wisconsin in 1990 was already known for the Amiga RPG Black Crypt. But its most significant success is the Heretic / Hexen saga, where Hexen II is the third entry of the series. Legendary John Romero, the co-founder of id Software, was involved in the design of the game, which was initially going to be called Hecatomb. When Romero left the company, Activision, that had the rights for the distribution of the game, pressured Raven Software to divide it into two parts: they became Hexen II and Heretic II.

The plot is a direct continuation of its predecessors, where two worlds were saved from the tyranny of two brothers called snake riders. In this installment, the character must travel to Thyrion and finish with the last and most powerful brother and his four generals, who are distributed in several continents.

The title uses a modified version of the Quake Engine, but the gameplay is quite similar to the other games of the series. Some changes include destructible environments and, most importantly, RPG-style level up abilities.

At the beginning of the adventure, the user must choose between four character types. Among them are the paladin, the crusader, the necromancer, and the assassin. Each of them has different statistics and abilities according to their specialty and style of play. These values are modified with a system of experience and levels, which, when raised, give a bonus of Mana and Health points. This is more similar to an RPG rather than an FPS. Besides, each of them has different weapons unique to their species that will accompany them on their journey.

The four commanders hide in different continents, and each one of them carries a unique theme in the adventure. Whether oriented to Mesoamerica, Ancient Egypt, Medieval Europe, or the Greco-Roman Empire, Hexen II is almost always consistent in the stylistic direction it takes. You could say that cold colors are almost nonexistent next to a warm palette that dominates all scenarios, but this is only half the story. Although there are exceptions, such as the intense red of lava, they are diluted continuously and lack any kind of brightness, giving grey key visual importance.

The title generally had positive reviews. With a great predecessor that generated high expectations, its fun multiplayer mode and new franchise additions were well received by its fans. If you also want to enter this world of interactive levels, variety of weapons, enemies, and even characters, this is your chance. And don't forget to bring a friend!