Quake II doesn't need any introduction. The first-person shooter created by id Software was released in December 1997. The legendary John Carmack worked personally on coding this ... 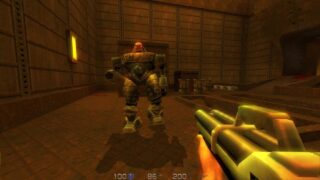 The legendary John Carmack worked personally on coding this gem, that was not planned to be a sequel to Quake. The engine of the game, called id Tech 2, has been used for many other games.

In 2001 the source code of the game was released freely.