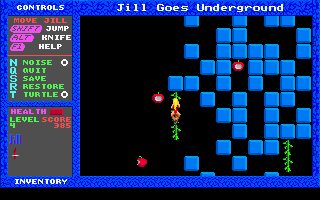 Jill of the Jungle: Jill Goes Underground is the second chapter of the Jill of the Jungle trilogy, a series of side-scroller platform games designed to compete with Duke Nukem and Commander Keen. It was released in 1992 for MS-DOS only.

Today it's time to review another of the first significant female figures in video games that are not just there to be rescued by the male protagonist. Will the second chapter of the franchise be as good as the first? Will it be an improvement on the original, considering how close they were released? Let's find out together.

The adventure continues the story of the previous installment. In this case, Jill is still trying to save the prince. After exploring the forest, The protagonist arrives at a castle, where - Roll the credits - Jill goes underground. What awaits her is a different dimension with new enemies and monsters unimaginable in the previous installment, so the story continues.

The gameplay is almost identical to the previous episode. Let's emphasize the word "almost" because some things change for the better, but we'll talk about that later. In this adventure, Jill will again be able to transform into different animals and go through all the levels evading obstacles and killing enemies, which are the creatures from other dimensions.

A curious fact is that the idea of Jill being a heroine saving a man is no coincidence. Tim Sweeney, the original creator of the title, wanted to create a woman capable of fending for herself in a video game world dominated by damsels in distress. Limited by his artistic capabilities, the game started as a level editor, but it made its complete transition into a game when Tim hired more people.

Regarding the audiovisual part, this is where the magic begins. The level design has more exciting colors, and even though the graphics are almost the same, you can see how the developers tweaked the color of the protagonist. Unlike the previous game that had 15 levels, this adventure takes a step forward and reaches 20. Besides, this title contains renewed and good quality music, which is more than it seems because, considering that this part came out almost at the same time as its predecessor, reusing the soundtrack was probably a temptation.

In short, Jill of the Jungle: Jill Goes Underground is a great adventure and a worthy sequel. The game maintains its entertaining nature with the use of animals, and although it may not seem like much today, a female protagonist is a powerful statement for the time. Another positive point is that the game aged very well, so you really should not only give it a chance, but two, three, and even five.

Jill of the Jungle Series