Jill of the Jungle: Jill Saves the Prince

Do you like retro video games, but you're sick of the same old hero saving the princess theme? Then get ready to meet Jill of the Jungle: Jill Saves the Prince, where now the femal... 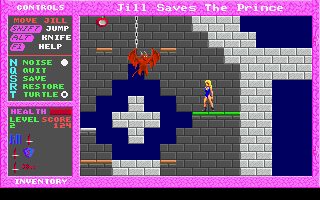 Do you like retro video games, but you're sick of the same old hero saving the princess theme? Then get ready to meet Jill of the Jungle: Jill Saves the Prince, where now the female sprite saves the male one (stay with me, I promise it's more interesting than it looks).

The game was developed and distributed by Epic MegaGames in 1992. Yes, today is called Epic Games, the creators of Fortnite, Rocket League, and Unreal Tournament. Jill of the Jungle was developed for MS-DOS as a trilogy, in which Jill Saves the Prince was its last part.

During the adventure, we continue using Jill, the Amazon, who defeated the forces of darkness in the two previous installments, now she must save the prince from the evil Green Lizard Man. Similarly, the protagonist does not embark on this mission out of a sense of duty to the prince or heroine. The prince must be rescued because he alone can prevent the evil plan of the Lizard Man: to destroy the jungle to build... Condos? Yes, condos.

Regarding the story, the fact that it is the Amazon who saves the prince seems to be no big deal, just a change of sprites. But looking at it with the eyes of the times, symbolically, it's a significant change. The empowerment of a female character would be only one of the first among many, so along with other names like Samus Aran opened the doors to other women such as Lara Croft.

The whole story of the game is simply ridiculous but in a good way. Starting with the intentionally generic villain to the point where "Green Lizard Man" is his name and not his description. Besides, even though deforestation is a serious issue, it's hilarious how the construction of condominiums is labeled as an evil plan. Finally, among many other things you will see while playing, I invite you to reach the end of the game just to see the last lines of dialogue. The final conversation between Jill and the prince is so random, dry, and surprising that you will laugh as much as I do.

Compared to the first two parts of the trilogy, you can see a considerable improvement in almost every way. First, a map with an eagle eye view was added to better sort the levels. The main character is part of a platform adventure full of dangers, but unlike previous releases, they are much more refined and creative. Another feature that returns for this last part is Jill's ability to transform herself into other animals, so the gameplay is still very varied. The heroine is continuously looking for keys and gems to open particular doors, so backtracking and exploration is a must.

In the graphic part, you can also see a significant improvement. Although some enemy sprites are suspiciously identical to those of other games (like a crab similar to Sonic the Hedgehog), most of them are very creative and graphically different from the enemies that one is used to see. The proportions of them are somewhat questionable, where you can see ants next to dinosaurs, both with the same size. In the beginning, I considered this as something wrong, but playing it, I got used to it, and I even came to appreciate it as part of the ridiculous and even parodic subplot that the game transmits. Finally, it is impossible not to mention how beautiful the colors are. Not only are they vivid, but they are mixed with a completely black sky that intensifies them even more.

For the soundtrack, very well elaborated melodies were chosen, many worthy of the best adventure and exploration games of the moment, and other much darker tones. This is added to the sound effects, which, although they don't make sense, one never gets tired of listening to the trampoline noise that Jill generates with every jump she makes.

Jill of the Jungle: Jill Saves the Prince is not only a beautiful, funny, and ridiculous game, but somehow it takes itself seriously and makes us do it too. This title went unnoticed, so it makes sense that many people don't know it. If you are a fan of the platformers and made it this far reading this, you have no excuse not to play it, and if you already played it, you have no reason not to play it again. It is worth every second of your time.

Jill of the Jungle Series