Phantasie is a role-playing game designed by Winston Douglas Wood and released by Strategic Simulations Inc initially in 1985 for Apple II and other 8-bit platforms. 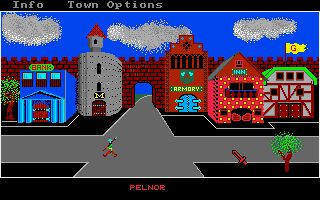 Phantasie is a role-playing game designed by Winston Douglas Wood and released by Strategic Simulations Inc initially in 1985 for Apple II and other 8-bit platforms.

The conversions to Amiga and Atari ST were curated by Andromeda Software and published in 1987. An MS-DOS version was released in 1988. The game was the first chapter of a popular series ended with Phantasie III: The Wrath of Nikademus (if we exclude the fourth title that was released in Japan only).

Phantasie resembles the first chapters of Ultima, at least in terms of graphics. Its main features include managing a party of up to 6 characters, with several classes to choose from: ranger, monk, thief, fighter, priest, and wizard. Races include the classic human, halfling, dwarf, elf, gnome, but also ogre, pixie, lizard man, minotaur, and more. Explorations of dungeons and wilderness use a top-down view. In towns, you can find shops and also banks, where you can store money. The view switches to a separate screen during encounters with enemies, where you can control each character in a turn-based combat mode.

Phantasie was a very advanced RPG, penalized only by graphics a bit outdated - or, at least, not improved when ported from 8 to 16-bit. Despite this, fans still love it, and that every RPG aficionado should try at least once.

When I was a kid I was obsessed with this game. Makes sense as I started playing D&D around 1983.