The Pharaoh's Curse is a platformer developed by Steve Coleman originally for the Atari 400/800. 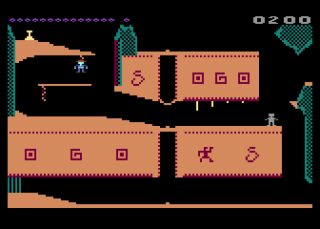 The Pharaoh's Curse is a platformer developed by Steve Coleman originally for the Atari 400/800. It was published in 1983 by Synapse Software, who ported it also to Commodore 64 and VIC-20.

Coleman created a Metroidvania-style game, where an archaeologist must discover the treasures hidden in the 16 rooms of a pyramid, without getting caught by the pharaoh. Finding the right path, using ropes, lifts, and avoiding obstacles will be fundamental. The game has several similarities to another Atari 8-bit success, Montezuma's Revenge. Clearly, both of them were inspired by Indiana Jones.

Anyway, the level design of the two games is a bit different, and Pharaoh also has some shooter elements: the mummy, in fact, can shoot at you (which probably doesn't make much sense, unless it's a spell or something), and you can shoot him back. So on some occasions, there is not much time to think about the puzzles.

The Pharaoh's Curse won the title of best VIC-20 game of the year, but all the other versions received excellent reviews. It's not a coincidence that somebody decided to make also an unofficial Amiga version. We will publish it soon; in the meantime, enjoy the original Atari 8-bit version. It's time to rediscover another great vintage title!