Space Empires is a series of galactic conquest and turn-based strategy games created by Malfador Machinations in the 90s. 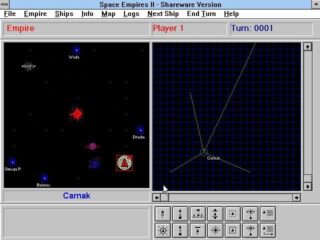 Space Empires is a series of galactic conquest and turn-based strategy games created by Malfador Machinations in the 90s. The first two titles, included in this package, were developed for Windows3.x.

Space Empires I, released in 1993, was a real "indie" competitor of the more famous Master of Orion. Instead of being released for MS-DOS, the game was developed for Windows3.x, using the native UI elements, like the RPG Castle of the Winds. Space Empires II, still for Windows 3.x, was released in 1995 and it introduced many improvements.

One of the best aspects of this 4x strategy game is the ability to design your ships, choosing from different hulls, weapons, shields, and several devices. Once you advance with technologies, new systems will be available, and you will have to update your designs. You will need to explore the galaxy, discover and colonize new planets to acquire enough resources. Other AI or human players will compete with you.

Graphics are quite simple, but the gameplay is terrific, try it, and you won't regret it.