Genesia (the US version was called Ultimate Domain) is a strategy game developed and published by Microids for the Amiga in 1993. 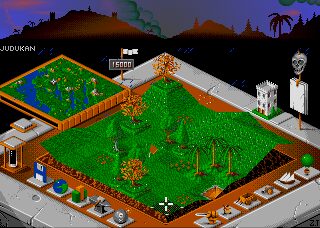 Genesia (the US version was called Ultimate Domain) is a strategy game developed and published by Microids for the Amiga in 1993. The game was later picked up by Software Toolworks and ported out to the IBM PC.

At first look, the game looks like Populous set in the 17th century, or if you prefer, Powermonger. However, even though it seems like a clone of Bullfrog's super-hit, it is not precisely. Genesia combines aspects of different titles to make a strategy game that acts as a jack of all trades. You will find elements of both The Settlers, Populous, and Sid Meier's Civilization.

The end goal of the game is to create a massive, profitable, and strong empire. Players can use the settlers to do various occupations to sustain the economy and growth. Woodcutters turn trees into logs; architects use raw materials such as logs and stones to create buildings, whereas the specialist will create items that can be sold as goods as soon as a shop is built.

The game graphics were a bit controversial; some reviewers said that it did not reach acceptable standards. However, it should be noted that the game was entirely written using AMOS, and that alone is quite a significant feat, in my opinion. Genesia was one of the few commercial games to be developed using the BASIC dialect for Amiga created by François Lionet.

The game is pretty in-depth, with a lot of variables working simultaneously. All these factors can drastically affect the progress of your empire. Sometimes it can become a bit boring, especially because the instructions are a bit confusing. It was also rumored that the game could be completed from the starting position without expanding, but I never tried it.

Overall, Genesia was okayish; it's fun to try out for a while. For sure, there are better alternatives, but if you like strategy games and the Populous look-and-feel, you should try it.

The game ONLY works if the game exe is dragged onto the dos box application. If, on the other hand, you use the commands provided by "Gamesnostalgia", the game crashes. Tested on win 7 64 bit!

The DOSBox configuration was not perfect, the settings were too fast, so the game didn't run properly. Now it should be ok, thanks @Maurizio!