Warlords II is the successor to the original Warlords, and it was developed and published by Strategic Studies Group in 1993 for DOS. 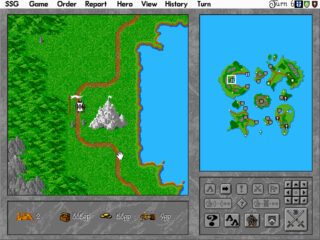 Warlords II is the successor to the original Warlords, and it was developed and published by Strategic Studies Group in 1993 for DOS. It later made its way onto Mac and then eventually Windows Mobile.

In this strategy RPG game, originally designed by Steve Fawkner, you begin your journey for conquest by choosing your race. The choices are varied and include Orc, Dark Elf, and Human, among others. Once that bit of business is out of the way you begin with just a single city that you are the ruler of. Your goal, of course, is to expand your influence and add to your empire. To do this, you must make war with other cities and defeat them.

Like the original Warlords, the game is turn-based, and everything takes a certain amount of “turns” to complete. You can organize your units into armies and set them loose upon your foes. To be successful in battle, you need to expand and create new units to join your troops. Combat itself is mainly autonomous and you don’t have any control over it, save for your unit types. Aside from battle, your units can also search areas and find gold and other useful things.

If strategy if your cup of tea, Warlords II is for you. With intelligent AI and challenging scenarios, you will have your hands full trying to conquer the land.