Blastar is a space shoot-em-up developed by Core Design exclusively for the Amiga and released in 1993.

The game features impressive graphics, with more than 3MB of images and animated backgrounds. The scrolling is multi-directional so that you will see enemies arriving from all directions. You will need to use the scanner to detect them and destroy them. Your ships must rotate, accelerate, and brake, as in Asteroids.

Unfortunately, the high-quality graphics and fantastic techno soundtrack don't compensate for the inadequate controls, bugged collision detection, and high difficulty level. This is a title that, with some more playtesting and polishing, could have become a masterpiece.

Ringworld: Revenge of the Patriarch

Ringworld: Revenge of the Patriarch is a point-and-click graphic adventure created by Tsunami Media for PC and released in 1992.

The game is set in the universe created by sci-fi author Larry Niven in his Ringworld novels (a copy of Ringworld was also included in some editions of this game).

You can expect the mechanics from a classic point-and-click adventure, with a list of actions you can select with a small icon-based console. The visuals are excellent, with hand-drawn backgrounds, characters, and high-quality animations.

Targhan is a fantasy action adventure created by Silmarils originally for the Atari ST in 1989 and then ported to Amiga and MS-DOS.

The settings and graphics could remind you of Barbarian by Psygnosis, but Targhan is different and superior in some aspects. It is based on single screens: more than 120 backgrounds were created by the artists, and most of them are stunning. The character and enemy sprites are big and well-drawn too. Targhan is visually impeccable, but unfortunately, we can't say the same about the animations and the combat mechanics; otherwise, we would talk about a masterpiece.

Fire Force (aka Fireforce) is a horizontal scrolling platform shooter developed by Dave Gibbons and Steve Day for the Amiga and Atari ST. It was published by ICE in 1992.

The game is inspired by the Konami arcade Green Beret, but it also reminds me of the Rambo, Commando, and other popular movies of the 80s. You are a special agent behind the enemy lines, and, of course, you will have to find a way to escape. If you think it's only about brute force, you are wrong. The gameplay of Fireforce is a bit more complex. Yes, there is a lot of violence, guns, bombs, and assassinations, but a stealth element makes this title more attractive than other similar games. If you think sneaking up on an enemy and cutting his throat is something you can do only in Deus Ex, you are wrong. Fire Force introduced it some years before.

Turrican 2 AGA is a free unofficial remake of Turrican II, created by converting the PC version with 256 color graphics but reprogrammed entirely from scratch for the Amiga.

The game is a faithful reproduction of the original game, with all the levels, enemies, and bosses. It also supports 2-buttons joysticks and has additional features like the ability to look down before jumping (solving one of the things I always hated about Turrican). It uses the beautiful 256 VGA graphics of the PC version, reproduced with the AGA chipset of the Amiga. Where the PC version was inferior, for example, it missed the parallax scrolling in several levels or some boss fights, the choice was to replicate the features of the Amiga game. The best of both worlds. Since the sprite of Turrican himself was different between the Amiga and the PC version, you can choose the one you prefer. Fantastic! 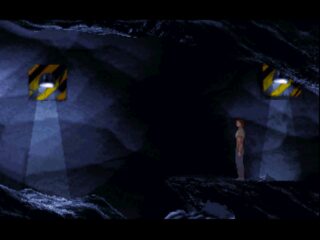 onEscapee is an action-adventure created by Invictus and published by Sadeness Software in 1997 exclusively for the Amiga.

The decision to invest two years in developing an Amiga game when Commodore was already dead and many Amiga users were moving to the PC was probably not wise. In fact, not many people had the chance to try (not mention buy) this game, which is a pity because onEscapee is an incredible creation. Inspired by Delphine Software's popular titles such as Flashback: The Quest for Identity e Another World, onEscapee is a cinematic adventure set in an alien world, vaguely cyberpunk. The music and visuals are stunning: after a 5-minute intro, you will enjoy the beautiful hand-drawn backgrounds and animations, digitized music, and fantastic effects such as reflections, lights, and ocean waves. The animations are impressive, with more than 1000 frames for the main character, which can perform 70 different moves.