Hooba noobie! Ayaw ko bobo siya! That, of course, means absolutely nothing, it's pure gibberish, Or should I say "simlish." Simlish is the familiar "language" that is used in the Sims series of games. Why am I talking about the sims and, worse yet, attempting to speak their language? That's because of Will Wright, the man behind the sims games. Everything from SimCity to every Sims game that followed. I grew up with the Sims games, and I always found the antics of those little sims to be hilarious, nonsensical, and often risque. I loved it. The very idea of making your own little person and playing God, if you want. But, I should probably backtrack somewhat if I'm going to do Mr. Wright any justice.

Will Wright's career in gaming began in 1984 (just 3 years before I was born). His first game was called Raid on Bungeling Bay, and he developed it for the Commodore 64. I had actually forgotten about this particular title. Still, my sister and I spent hours playing it, trying to bomb factories. In Raid on Bungeling Bay, you are at the controls of a helicopter that departs from an aircraft carrier. Your mission is to rain down destruction from the skies on enemy factories.

This mission is made more difficult by turrets, fighter jets, and other anti-aircraft obstacles. Speed is vital, as the factories will produce more advanced technologies to take you out.

Unlike Will's later titles, "Bungeling Bay" was very action-focused. Yet, it also provided Wright with one critical inspiration: the desire to "create" instead of just "experience." You see, Raid on Bungeling Bay had a robust map creator and a level editor. Wright often recalls in interviews that he discovered he often enjoyed creating the levels and obstacles more than he enjoyed playing the game itself.

And this is how the idea of SimCity was born.

SimCity and the birth of Maxis

The only problem with Wright's new fantastic idea is that no one wanted to fund its development. At that time, arcade action was all the rage, and the new design was totally different from this fast-paced trend.

All of that changed two years later in 1986 when Wright met investor Jeff Braun. This dynamic duo formed the legendary studio Maxis. SimCity, the game that Will Wright had written in 1985 for the Commodore 64, was finally released in 1989. Initially for Macintosh and Amiga, then many other platforms.

It was not only a huge commercial hit but literally changed video games forever. Presenting gamers with an endless and open-ended gameplay style, SimCity neither pressured anyone to do anything nor failed to account for almost any kind of city design theory. It was one of the few games out there that genuinely let gamers explore their own in-game world on their own terms.

SimCity wasn't just a commercial success, it was also a massive inspiration for other gaming designers. It's not a secret that another legendary designer, Sid Meier, was inspired by Sim City when he created Sid Meier's Railroad Tycoon and, later, Civilization.

Of his creative process, Wright has said:

Well, one thing I've always really enjoyed is making things. Out of whatever. It started with modeling as a kid, building models. When computers came along, I started learning to program and realizing the computer was this great tool for making things, making models, dynamic models, and behaviors, not just static models. I think when I started doing games, I really wanted to carry that to the next step, to the player, so that you give the player a tool so that they can create things... they design something that the little world inside the computer reacts to. And then they have to revisit the design and redesign it, or tear it down and build another one, whatever it is.

After SimCity, Will started to work on another game called SimEarth with Fred Haslam. In this case, it was a planet simulator. It was based on the Gaia hypothesis defined by scientist James Lovelock (who also helped with the game and wrote part of the manual). SimEarth: The Living Planet is an incredibly fascinating game that won several awards as Best Educational Game and Best Simulation Game.

After that, Wright won the prize again with SimAnt: The Electronic Ant Colony, released in 1991. Like SimEarth, the game was based on scientific work: this time, it was the study of E. O. Wilson on ant colonies. Later, Wright would reveal that it was Sim Ant to give him the idea of The Sims.

Maxis released other "sim" titles in the following years, such as Sim Life, Sim Farm, Sim Tower, but none of them designed by Will Wright.

Apparently, he wasn't even interested in working on the next chapter of SimCity. At least not initially. In fact, the project was assigned to Fred Haslam, who tried to reuse the code of SimEarth to make the next SimCity. But when Will saw the first prototype, he realized the game was totally wrong, and he decided to take the lead. One of the things he determined was to change the perspective from top-down to a pseudo-3d. That's how the isometric-perspective title we all know and love came to be. Fans loved the new graphics style. Released at the end of 1993, SimCity 2000 sold 300,000 copies in the first four months alone.

Wright broadly expanded upon the concept introduced in the first game by exploring notions of layered systems and multiple dynamic points of change in a cityscape. Like before, you have the basic mechanics of residential, commercial, and industrial zones, but you also have the conceptual arcologies and sewer systems that were not present in the last game.

The game was later ported to Amiga, Macintosh, SNES, and many other platforms. It sold probably more than 3.4 million copies. PC Gamer magazine named it the 7th best computer game of all time.

But after the release of SimCity 2000, things changed a lot for Maxis. In 1995 it went public, new managers arrived, and a lot of expectations arose. The management wanted to release 4 new games, which was unrealistic. Will wasn't even able to work properly on his latest idea: SimCopter, a helicopter flight sim that would allow players to fly over cities created with SimCity 2000. The idea was excellent because users would have been able to see their towns finally in full 3D. But the game was delivered too early. When Sim Copter was released at the end of 1996, Will was the first to be unhappy.

The other 3 games were released too, but they were even worse, and the company increasingly watched its balance sheets plunge into the red. Maxis also tried to fund other games, but the concept of diversifying their game library beyond the "sim" concept didn't actually result in success for the company.

As losses piled up, Maxis knew that the logical next step was to release SimCity 3000. The problem was fan expectations about what that would be were high. And even worse, the management wanted it to be a 3D game, although the developers new the technology of the time was not good enough to reach the required level of detail.

The first prototype of SimCity 3000 illustrates this tension perfectly as it attempts to port the series to 3D but in a wholly strange and unsatisfying way. In fact, the people behind the trailer unveiled at E3 in 1997 admit their embarrassment. Nonetheless, things continued to look dire for the company. Execs were looking at the proposition of releasing the current mess of a game in a cash-grab that would destroy the "Sim" brand forever. The alternative was potential bankruptcy.

Thankfully, none of these scenarios came to pass since Maxis found itself being acquired by the large and wealthy Electronic Arts. Maxis was sold to EA in June 1997 for $125 million in EA stock after some period of resistance on Maxis' part.

EA fired most of the old management and restarted the development of SimCity 3000 from scratch (with isometric graphics). Some streamlining and new cash infusions allowed the devs to pursue the dream of Sim City 3000 that became the game we know and love today. SimCity 3000 was finally released in February 1999 and was a success.

Electronic Arts made another smart move. They gave Will Wright all the resources he needed to develop his new idea: a game that he called initially Dollhouse. He had this concept of human behavior simulator, but he hadn't had the chance to work on it until then.

This is how he described it:

I don't think people realize how much tactical and strategic forethought goes into their daily lives... There's a whole subconscious time-efficiency layer in our lives. In essence, real-time strategy is our lives.

But it was not just about people. It was also about architecture. Wright's research for The Sims took him to an author named Christopher Alexander from Berkeley, who wrote in 1977 a book about functionality in architecture, called A Pattern Language. Will was inspired by his theories.

But if you make a game about architecture, you also need someone to evaluate how good is your creation. That's the final goal of the sims living in your house: giving you feedback about how good and functional you made it.

The game would be much more complex and tactical compared to SimCity. The player could interact with other characters and almost 150 different objects, each one of them satisfying a different need: hunger, comfort, hygiene. Thanks to an advanced artificial intelligence algorithm, the sims had a certain level of independence. Still, the player was needed to guide them.

And this is the elegance of Will Wright's designs: Taking the abstract concept of functional architecture and resolving it into a game with so many open-ended options and parameters that it will no doubt redefine the paragons of game design....

So, to close out a fantastic stint that began in 1989, Will Wright finally released his creation in February 2000: the game was called The Sims. The title proved that lightning could strike twice for the developer. This game went on to spawn a multimedia juggernaut that carries the Sims franchise to this day. Simulating a life with its myriad of complexities is perhaps the purest expression of Wright's desire to explore the creative and chaotic nature of open-ended gameplay.

Creating a type of gameplay style that many of us take for granted today, The Sims introduced gamers to a game world that they could control and manipulate entirely on their own terms. As opposed to the linear, roller coaster-style games that dominated the industry, Sims games were contemplative and winding - somewhat more like a stroll through a forest than a walk through a theme park.

It is this same leisurely quality that has sustained them to this day, and it is a spirit in gaming for which we have Maxis' legend Will Wright to thank.

Will's career didn't end after The Sims, but this long article will end here. You can find plenty of articles and interviews out there. You should also have a look at the last game he created before leaving Maxis, called Spore, at the official home page.

Will Wright is one of the most important and most influential game designers of all time. If one day, I will publish my list of the top 100 game designers, he will be in one of the top 3 positions. For sure, he changed the world of videogames forever, and for this, we can only say Thank you! 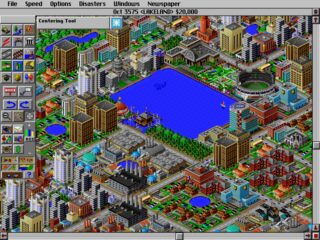 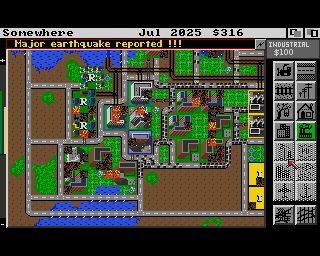 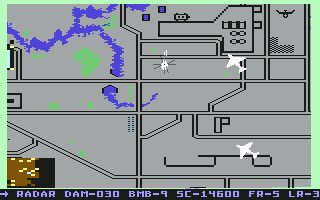