Caesar III is a city-building historical sim created by Impression Games and published by Sierra in 1998. 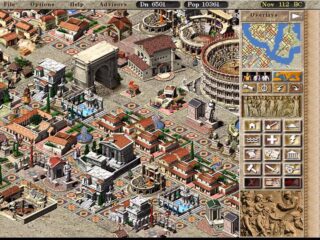 Caesar III is a city-building historical sim created by Impression Games and published by Sierra in 1998. It's the third chapter of the popular series Caesar created by David Lester.

The game is set during classical antiquity, and all aspects of typical Roman city life are reproduced faithfully: food, resources, religion, military, and so on. Caesar combines both elements of Sim City 2000 and The Settlers II. You have to build and expand a city, deciding the residential zones (in Caesar II the houses are built, in Caesar III you choose the areas, as you do in SimCity); but also infrastructures, security and religious buildings, recreational areas and so on. At the same time, you have to pay attention to the production and distribution lines, so that people and resources can move adequately (just like the trade routes of The Settlers). You will need to produce food, mandatory to sustain your population, but also wine, oil, pottery, weapons, furniture, and other items you can trade. It's fair to say that Caesar III represents the best of both worlds.

There is a lot of micro-management, but not the boring one, it's totally enjoyable.

On the other side, war and all military aspects are the weak points of this game. You can just build barracks, that will create soldiers, but you won't be able to control precisely what they do. But this is not a game for warmongers. David Lester was able to design the perfect historical city building-resource management game, and this is how you should approach Caesar III.

Unfortunately, the game is available only for Windows. But the good news is our package includes the widescreen patch for HD monitors.

If you want to enjoy the full experience, we suggest purchasing Caesar 3 on GOG.

Works very well, I even installed HD option.
thanks for the good work...