The Bard's Tale II: The Destiny Knight is the second chapter of the popular RPG series created by Interplay and published by Electronic Arts starting from 1985. 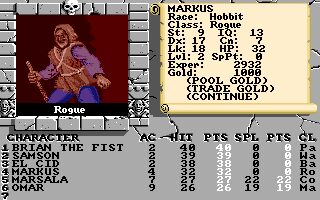 The Bard's Tale II: The Destiny Knight is the second chapter of the popular RPG series created by Interplay and published by Electronic Arts starting from 1985.

The game was designed and programmed by Michael Cranford, the author also of the first game (but not of the third one). It was released in 1986 for the Commodore 64; then, in 1987 for the Apple II and in 1988 for Amiga and MS-DOS.

The Bard's Tale, released in 1985, was already a revolutionary game. For the first time, it introduced a massive ecosystem of races and classes, animated monsters and enemies on screen, visible magical effects, and a complex spell system. Interestingly, spells could be used not only for combat but also for solving puzzles. Funnily, you could even import a party of characters for other games such as Ultima or Wizardry. Last but not least, music and bards, generally ignored by computer RPGs, were a fundamental element.

All of this was still present in the sequel, but The Destiny Knight is a much bigger game: instead of a single city, there are now 6 cities, plus 25 dungeons and the wilderness areas. Another important new feature was ranged combat. Being able to use bows and ranged spells made combats much more tactical and opened new scenarios.

If this was not enough, the game introduced a new class, the Archmage, and the possibility to conjure creatures that would join the party for a while.

If you sum all of this, it's not strange that The Bard's Tale II received so many positive reviews. Many consider it the best title of the series. Maybe the only downside is the difficulty level, it's quite easy to see your party defeated. But this is not going to stop you, right? The Bard's Tale II: The Destiny Knight is a legendary game that all RPG fans should play at least once.

Don't forget to check also The Bard's Tale Trilogy, a completely remastered version of all the three games, available on Steam and GOG.