Descent II is a first person shooter published in 1996. It's the sequel to Decent. The game was published by Interplay Productions and developed by Parallax Software. Originally in... 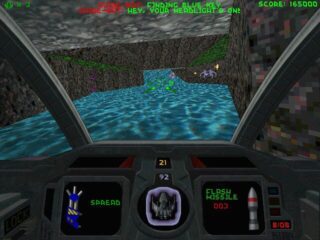 Descent II is a first person shooter published in 1996. It's the sequel to Decent. The game was published by Interplay Productions and developed by Parallax Software. Originally intended as an expansion pack for Decent, it grew into its own game. Initially published for DOS, it has since been ported to Windows, Mac OS and Playstation.

As in its predecessor Descent, players inhabit the character of the “Master Defender” a mercenary tasked with destroying mines for the Post-Terran Minerals Corporation. The game gives you 720 degrees of movement. It also puts you in control of the “Pyro-GX” Spaceship. Your main goal is to locate and destroy each mine's reactor. There's a guide bot that helps to guide you to the reactor. You destroy it with an array of weapons like the Plasma Cannon, the Fusion Cannon, the Spreadfire Cannon, the Vulcan Cannon and more. The soundtrack employs industrial metal music from artists like Type O Negative and Brian Luzietti.

Descent II is truly an improvement on the original. The addition of the guide-bot helps make the difficulty more manageable. The graphics are fantastic, and the industrial music soundtrack really adds to the experience. Not much of the gameplay is different from the original, but it's been fine tuned to make for a really excellent game.

Okay, let me try starting a new thread for this one. It kind of got buried in my previous posts about the graphics problems.
I have a Thrustmaster joystick. When I calibrate it in Windows, the Hat shows in the calibration window, and it registers when I move it. So I know it works. In the game, on the panel to customize joystick controls, it already says (without any changes on my part) that the Hat is supposed to be used for sliding left, right, up, and down. But when I'm playing, the hat does nothing. I know the game recognizes when I move the hat because I can actually redefine a function to be "Hat Up" or "Hat Left". It knows I've moved the hat when I'm on the customize panel.
Any idea why the Hat isn't working in the game?
A possibly-related question - what is the Slide On function even for? It's shown just above the section for defining buttons (or keys on the keyboard customization panel) to actually perform a Slide function, but I don't know what it's for.