Spear of Destiny is a first-person shooter developed by id Software in 1992 for DOS. 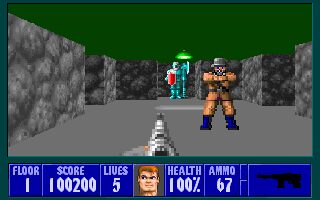 Spear of Destiny is a first-person shooter developed by id Software in 1992 for DOS. Since this title was not released as shareware, id Software gave the publishing rights to FormGen.

The title was designed by id Software, one of the most influential video game companies known for creating classics such as Doom and Quake. Spear of Destiny is a direct prequel to Wolfenstein 3D, which was developed a few months earlier. The creation of this game counted with Tom Hall and John Romero as directors and designers, two of the company's co-founders, and also responsible for the previous release.

In this case, the player is again in the boots of B.J. Blazcowicz, an American spy who is also the main character in Wolfenstein 3D. In this case, the Polish descent soldier must infiltrate a Nazi castle and recover the Spear of Destiny, stolen by the Germans in Versailles. The soldiers are not the only concern of the hero since the title hides a more supernatural aspect.

The title has 19 levels in the story mode and 2 hidden; unlike the previous delivery, Spear of Destiny is not separated by chapters. It also has 5 bosses, which include some of the hardest of the entire saga. The interface and gameplay are identical to those of its predecessor, so the release is very friendly to fans of Wolfenstein and fans of the FPS genre.

The game engine is called Wolfenstein, in honor of the franchise for which it was initially created. The game colors are decided according to the level, where each one handles a diverse palette. They are generally opaque or cold to highlight the Nazi flag that is attached to many walls. On the other hand, the title often makes exceptions and sets red or magenta fluoride scenarios. Finally, Robert Prince returns to the saga to take charge of the musical part once again, where he directs tones oriented to both mystery and action.

Spear of Destiny was well received by critics and fans, happy that they expanded, even more, the universe of its predecessor. The only critic was the lack of innovation, which was addressed later with the two expansions Spear of Destiny: Return to Danger and Spear of Destiny: Ultimate Challenge.

All this makes it a great example of handling the prequel of a very successful title and becoming a must for fans of the saga.

and all of the guns. But beware: this code takes away your score too. To access God Mode, press Tab, G, and F10 at the same time.

Yes it includes Return to Danger and Ultimate Challenge.

Does this have both the mission packs included as well?