Ultima Underworld: The Stygian Abyss is a fantasy action RPG developed by Blue Sky Productions (Looking Glass Studios) and published by Origin Systems in 1992 for DOS. 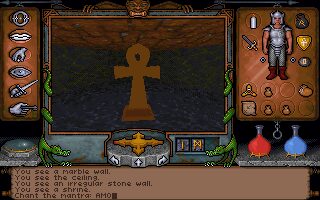 Ultima Underworld: The Stygian Abyss is a fantasy action RPG developed by Blue Sky Productions (Looking Glass Studios) and published by Origin Systems in 1992 for DOS. It was later ported to FM Towns, Playstation and other platforms.

The game was directed by the creator of the Ultima universe, Richard Garriott, produced by Warren Spector (System Shock, Wing Commander, Deus Ex and more) and designed by Paul Neurath.

This was one of the first RPG games to feature a truly 3D environment where your character can look up and down, swim, and jump, among other things. Unlike most similar games, this was the first to break away from completely square areas, allowing for quite a bit of environmental variety (bridges, slopes, etc.).

The game takes place in the land of Britannia featured in the previous Ultima games and you play as the Avatar still. Falsely accused of kidnapping the Baron’s daughter, the Avatar is cast into the Stygian Abyss as punishment. The Avatar must now embark on a quest to find the missing girl and stop her true captor. Stygian Abyss features real-time combat, using the cursor’s position to determine the type of attack (center=slash, and so on). Spells can also be used in combat by choosing the correct runestones for each spell. Stygian Abyss has open gameplay, so feel free to wander around and do as you please.

Winning more than 10 awards Stygian Abyss has definitely made RPG history and influenced the genre itself. This is one of the few RPGs to stand the test of time and should be experienced by any true fan of the genre.