Ishar 2: Messengers of Doom is the second chapter of the fantasy RPG saga created by French studio Silmarils. 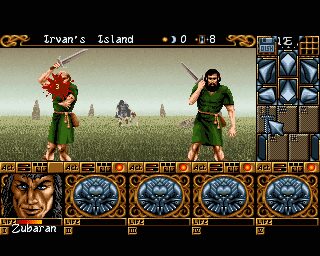 Ishar 2: Messengers of Doom is the second chapter of the fantasy RPG saga created by French studio Silmarils. The game was released in 1993 for the Amiga, Atari ST, and DOS.

Like the first Ishar: Legend of the Fortress, the gameplay is real-time, based on a first-person perspective that allows you to travel in and interact with a pseudo-3d world. Technically speaking, this makes the game similar to other dungeons crawlers like Dungeon Master and Eye of the Beholder, but the graphics and atmosphere are totally different. Mainly because the world is not just made of dungeons; for the majority of the time, you are outdoor, traveling through towns, forests, swamps, and mountains, a choice that made the game quite innovative at the time (and probably started a new genre, think about The Elder Scrolls II: Daggerfall and the other titles of the series for example).

The game also features a night and day cycle, so you will find the shops closed during the night. The fantasy world is big, much bigger than the first Ishar, and you are entirely free to visit it as you prefer.

Another fascinating aspect is the management of the party. You can add up to 4 characters (for a total of 5), but each one of them has a specific personality. When you want to add (or dismiss) a member, the others will vote for or against it. Somehow, this reminds me of Dragon Age: Origins.

Ishar 2 is considered the best of the series. The Atari ST release received impressive reviews, but it's the Amiga AGA version, featuring beautiful 256-color graphics, that shows the best of this game. A fine example of a European-style RPG.

You are very welcome! Happy that you appreciate the huge work behind the curtains :)

Thanks for this amazing site, man!! You take awesome care of these files, always updated, patched and ready to go! Thanks thanks thanks